I was six years old the day a long furniture truck pulled into our driveway to deliver our piano. I can still taste the hot chicken noodle soup I was eating that winter afternoon as I listened to the two moving men roll the piano into our house and install it. The moment they were finished, I raced into the living room where I beheld my family’s new acquisition: an upright piano made of blond wood polished to a sheen that was matched in brightness by its ivory keys. Impulsively, I reached out and touched a random white note when to my utter astonishment, an image appeared outside my face, a few inches above my eyes that arrived so quickly it startled me into a state of wonder.
What I saw was green but not just any green. It was the green of shimmering light within the loose confines of a rectangle that had diffuse edges. And while the vision vanished almost as quickly as it arrived, I never forgot it. It disappeared at exactly the moment the sound receded from the room but not from my memory. Indeed, I consider it a seminal experience of my life and the start of my synesthetic experience though of course at the time I had no words to describe it at all, not even to describe what shade of green I saw that day – a green I have really never seen in the external world. It is neither the color of green pigment nor the color of the natural world. Even so, a few years ago — almost half a century after this experience of seeing my first “green note” – I took a reflection image that captured what Nature could not do alone. When I looked at the image later, I recognized the shimmering green from that first experience and thus named the image “Green Note” (see image). 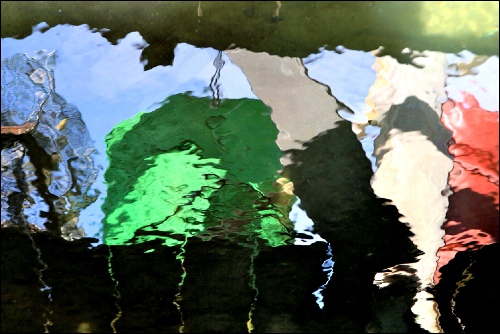 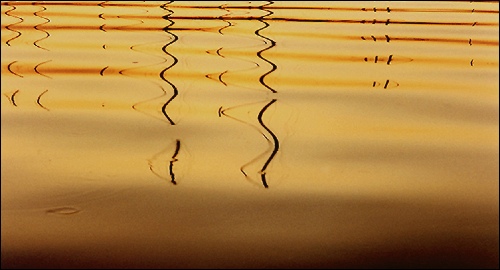 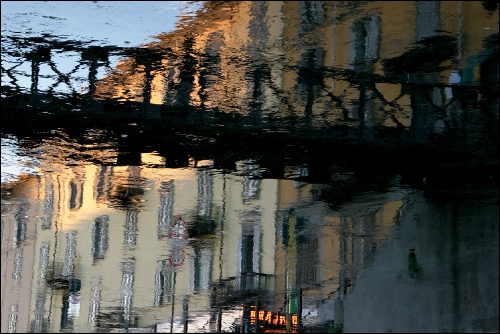 Vibrato Bridge 2004
Another example of how my picture language works as personal musical nomenclature is exemplified in the image “Vibrato Bridge” (see image), a reflection that I photographed on the surface of the water of one of the canals in Milan, Italy more than a decade later. The colors I heard the evening that I took this photograph are not specific to any particular musical instrument though the sound is definitely within the lower range or register that is typical of brown in my perceptions. What is specific is the shape of the bridge, which produces the sound of a vibrato. Indeed, for me the shape IS a vibrato both as music I hear and secondarily as a symbol that would indicate I should play a vibrato if I saw it on written music. No one would have to teach me how to interpret this shape it as a musical symbol.
Interestingly, if I eliminated the color from the photograph and changed it into a black-and-white image, I would still instantly recognize the shape as a representation for vibrato, but I would not necessarily hear a vibrato because without the color, the shape is only as a symbol for me in this instance. Apparently, the color is required to turn the shape or the symbol into music I can hear just by looking; that is, the color required for the music to be heard in my mind. In addition to sound, I feel texture when I look at the photograph today. I feel my skin draped in a cloth of light brown silk appliquéd with a black lace trim. 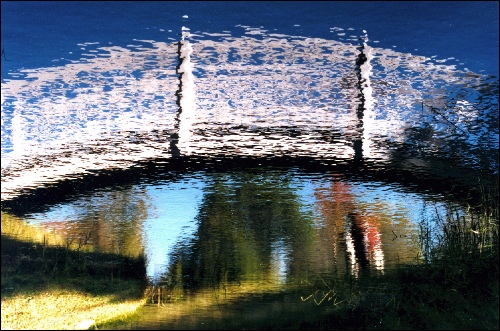 Homage to Monet 1997
Another good example of how color and shape elicit sound for me is the photograph named “Homage to Monet” (see image) which I took when I heard a chord of color. Incidentally, a “chord of color” is not a metaphor for me but quite literally what I saw when I heard the sound by looking at the image on the water. I also heard a crescendo created by the shape of the white arc that goes across the image and I clicked the shutter when I felt the crescendo rise and peak inside of me. The sound of the musical chord is produced by the arrangement of the colors themselves. By the way, I was not thinking of Monet or his famous footbridge painting when I took this image, but afterwards, so many people said that my image reminded them of that famous painting that I felt obliged to name the image after him. What I secretly wonder is whether Monet heard the same sound as I when he painted his image. 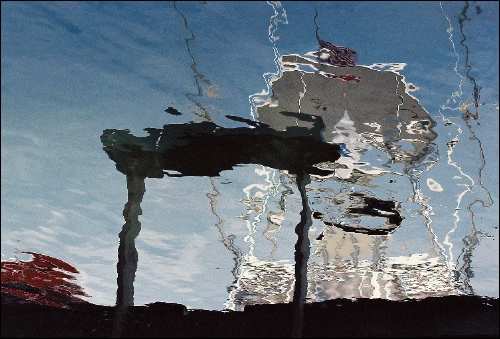 Layers of Meaning 1999
The image “Layers of Meaning” (see image) perfectly represents what a layered thought looks like to me. The dark shape in front — a shape that is reminiscent of an Asian letter or the lowercase mathematical symbol for Pi — represents the visible to me, while the white shape behind it stands for the second version that I automatically view on the other side of consciousness. Even as I look at the white additional layer, I understand that it is generated from the dark object in front of it, which is the reason that its edges are indistinct and that its shape is amorphous, much like the nature of meaning itself.
I have chosen the perfect medium for the role of synesthesia in my art. While I naturally live my life in metaphor, the water provides a mirror for both sides of me; the reflection matches the inner screen that other people cannot see while it also reflects (no pun intended) the qualia of experience which is to me is “the real thing”. Similarly, the water, concentric circles and all, matches my conscious life, the one that is most apparent to others. Reflections are to water as dreams are to conscious awareness. 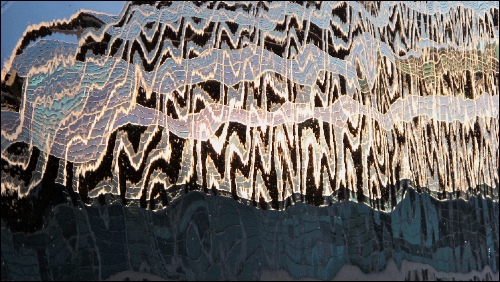 Abstract Blue 2001
A very recent photograph I took titled “Abstract Blue” (see image) provides an interesting illustration of how my synesthetic self is capable of sometimes slipping out and speaking for me in a picture language that is not meant to be heard by others and not necessarily understood by anyone but me.
A friend had asked me to define the meaning of the word “leitmotif” as it is used in literature. “A leitmotif,” I explained, “is the invisible part that runs through the composition that effects the whole.”
“Invisible?” she asked? You mean it’s a visual term?” Flummoxed by her response, I tried again to explain my meaning. “No, not visual,” I said, “ I mean it is a sub-theme that runs along the length of the whole but which you don’t notice as you listen to the whole thing.”
“Listen?” she said, “you mean it refers to music?” While of course the term could apply to music, that is not at all what I meant, I was referring to how it functions in a narrative stream.
“If you look at my image ‘Abstract Blue,’” I suggested, “you will notice two wide swaths of color that run across the center of the image left to right. The one on top which stands out as blue looks like written music and has the sine-wave shape of played music while the magenta swath beneath it isn’t necessarily musical but nonetheless introduces an interesting counterpoint to the overall tribal pattern of the image. They provide the leitmotif,” I concluded, “much like counterpoint.”
“Counterpoint? Music? Color?” she replied. “What do these terms have to do with literature or words?” and she was right to ask. As I later realized, my real problem was that I did not realize I was speaking in metaphor. When I figured out specifically what my problem had been, I felt myself blush in the same way I might blush if I were told my slip had been showing.
I felt embarrassed to realize I had been speaking in metaphor without knowing it. I had thought I was simply describing “the facts” but since the facts I was describing were the pictures I saw when they popped up on my internal screen, I was not speaking in facts at all; I was speaking in pictures. It was as if I had forgotten to translate that first response where my inner self throws up pictures on the screen faster than I can come up with words that mean the same thing. The experience did however point out something I had not understood before concerning the role of synesthesia in both my art and in my life.
I had accidentally spoken in metaphor because I had forgotten to translate my usual pictures into metaphor-free words but the meaning of my mistake had more important meaning, I realized. For it was not I who was doing the talking at all when I tried to answer her question. It was my usually mute inner self who had stepped forward and spoken up in my place using the dead language of my childhood aloud.
ISSN 1913-536X ÉPISTÉMOCRITIQUE (SubStance Inc.) VOL. XI

This author does not have any more posts.